Other shows and events Damian Jay has performed in

As well as being available for children's parties, Damian Jay is also a firm favourite in many leading holiday centres around the UK in his hysterically funny show ‘Comedy Cabaret for Kids’

He has performed at many local charitable and fundraising events helping to raise money for many worthwhile causes. Including Naomi House, the Rainbow Centre and KIDS.

Below are just a few of the many shows and events Damian has performed in, or appeared at. Click an image to enlarge. Image opens in a new window.

Click on the buttons below the images to view  the details about each show. 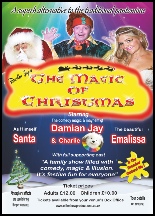 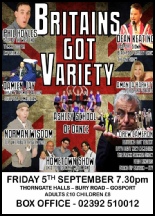 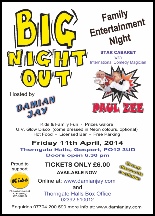 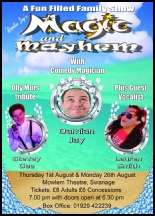 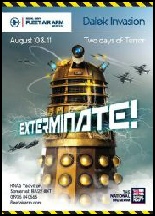 Book Damian Jay for YOUR event too.

Hosted by Damian Jay, the night kicks off with a full 45 minutes of silly and outrageous games & competitions for the whole family to enjoy. With plenty of great Prizes and booby prizes to be won.

Star Cabaret - Paul Zee will have you crying with laughter at his zany antics. Suitable for the whole family to enjoy, you'll be talking about this guy for weeks. Paul is a regular at many of the top holiday destinations around the UK, aboard and also some of the most luxurious cruise lines in the world. And for one night only you can see why he is in such demand.

Later on in the night you could be going home with a CASH PRIZE or one of several other fantastic prizes.

Finishing off a great night, is the amazing U.V. GLOW disco. Come dressed in loud and garish neon colours and see just how bright you glow. So throw some shapes on the dance floor and call it dancing! with some of the best music and party tunes around you'll look great on the dance floor.

From the moment the doors open so does the fully licensed bar and if your peckish there  will be hot food available too.

As with all great parties, things must come to an end. This one finishes at 10.00 pm.

A fun filled family show that will amaze and amuse. Bursting with comedy magic and crazy antics plus fabulous balloon creations and millions of bubbles. (The whole theatre is filled with bubbles)

Guest vocalist, Lauren Smith is well on her way to stardom. She is a great vocalist having appeared in London's West End and the fabulous world famous London Palladium.

And featuring Stevey Gee, one of the best Olly Murs tribute acts in the UK today. He has appeared on The X Factor and has toured extensively with the smash hit production 'The Magic of Christmas.'

Almost Olly Murs will have you rocking in your seats.

We are on high alert this summer anticipating a massive Invasion of the Daleks on Saturday and Sunday August 16th & 17th. Organised by the Fleet Air Arm Museum in conjunction with the Charity Dalek Squad and Charity Sci-Fi, this year’s event will see new characters and Daleks taking to the stage and terrifying visitors.

In addition to the Daleks and their evil accomplices there will be celebrities, traders in Dr Who merchandise, face painting and family activities. To add to the fun and terror of the day, Damian Jay will be delighting young and old alike with his comedy Dr. Who themed magic shows and making some superb themed balloon models. Children are also encouraged to wear Sci-fi fancy dress and there will be an opportunity to make your own Dalek using yogurt pots donated by Yeo Valley. The day will finish with the March of the Daleks, when the army of Daleks and their evil friends will parade through the museum ending under Concorde for a giant photo opportunity.

Britain’s Got Variety is hitting Gosport this September. Armed with some of the best UK ACTS around this is one night you will not forget. Variety is back with a big bang! SO who’s Going to be there:

The Magic of Christmas

The magic and wonder of the festive season is brought alive in this superb alternative to the traditional Pantomime.

‘Guaranteed fun and laughter abound as madcap entertainer, Damian Jay, leads a wonderful cast, between them creating the most fun you will ever have in a festive show. With a sprinkling of Pixie dust, comedy, magic and startling illusions you will be whisked along on a roller coaster ride of festivity, where Father Christmas makes his magical appearance right in front of your eyes.’ This family show not only makes you laugh out loud but will hold you captivated as the Fairy’s dream comes true, and will leave you spellbound at its stunning climax. With some familiar festive tunes along the way, you’ll be left dancing in the aisles. At the end of the show the Boys & Girls (and grown-ups too) can meet Father Christmas and the cast.

“With lots of audience participation throughout, It’s  PACKED FULL of comedy, magic, illusion and FUN.”

The Twins – the world’s only identical twin illusionists.